A popular option course for Key Stage 4 is Media Studies. The course follows the AQA GCSE syllabus and depending on the cohort can lead to a single or double GCSE qualification.

The course is composed of a mixture of examinations and controlled assessments, depending on the qualification. For the single GCSE exam topics have ranged from the analysis of Action Film, Television Crime Dramas through to the Music Industry. Exam topics change on an annual basis. The double award also expects pupils to demonstrate their understanding of how the industry works and is regulated.

The course explores the way that today’s society is influenced heavily by the Media from the television programmes we watch to the magazines and newspapers we read. This is done through a number of different ways, from theory work to practical projects.

These range from a plethora of Media types such as the analysis of teen magazines and their appeal to a certain target audience; this also included the production of their own magazine. Another aspect of the course featured the analysis of disaster movies from different decades. Pupils are expected to analyse how the genre has evolved. In addition to these topics pupils also cover the music industry, reality television, moving image and the internet. 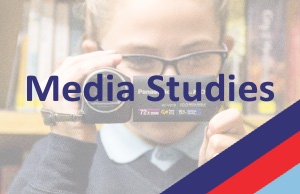