Out of the land

“In Cumbria, the legends grow out of the land…”

Cumbrians tread paths first walked by Romans, Vikings and early saints. It is not surprising, then, that behind every tree, stone and fell there lies more than just the land. There are stories to be told, and histories to be learnt, everywhere – but nowhere more so than in Cumbria. Open your eyes, and your imaginations – for who knows where the truth lies? 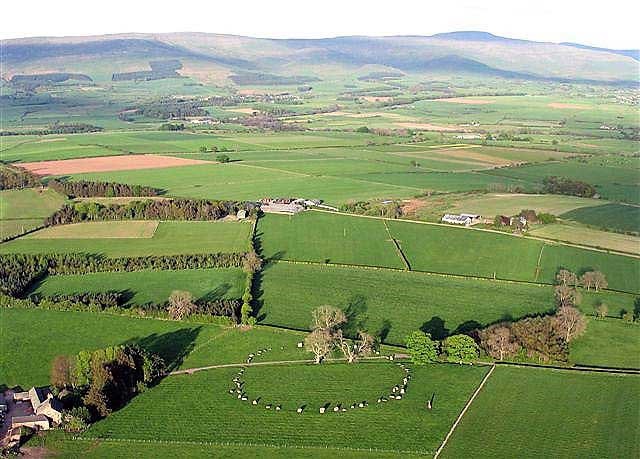 Near the village of Little Salkeld in Cumbria stands the stone circle that comprises the Neolithic monument called Long Meg. It’s older than Stonehenge, and completely untouched by tourism; visitors can stand amongst the stones, walk around them, and neither the resident cows nor the land owner seem to mind. But should you? Is it entirely safe? Are you sure?……

Many years ago, in the village of Little Salkeld, there lived a woman called Meg. Meg kept the old religion… people were afraid of her and called her a witch. She had many daughters, who followed her guidance and ways. The local priest knew of them, but was tolerant, and didn’t interfere, provided they didn’t practice their religion on the Sabbath. Likewise, Meg and her daughters respected the priest’s beliefs and maintained a distance. 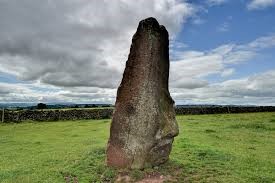 There were two days in the year which were important to Meg and those who followed her; Hallowe’en, and the Summer Solstice…. All fine, so long as these didn’t fall on the Sabbath, when she had promised the priest they would stay away. But one summer, inevitably, the Summer Solstice fell on a Saturday – so any celebrations after midnight would fall into the Sabbath. The priest went to Meg, and they spoke calmly about this, and Meg agreed that they would finish their celebrations by midnight. Satisfied, the priest returned to his church.

Meg called her daughters to her and told them they must end their celebrations before midnight on the following Saturday. The daughters, although frustrated, understood and agreed. The following Saturday night, Meg and her daughters danced at the top of the hill above the village, wildly, under the summer moon; at 11:30, Meg called the musicians for one last tune, and when it ended, the musicians, Meg and her daughters started down the hill – but just then, coming up the hill in a long, black cloak was a stranger with a fiddle under his arm. If the wind had blown his cloak aside, Meg might have noticed a cloven hoof… but it did not blow, and she did not see… The stranger approached the daughters and asked if they were in need of a musician, and took out his fiddle and began to play as though the very hounds of hell were at his heels. The daughters were entranced and danced wildly – and were still dancing when the church clock struck midnight. In the church, the priest heard the sound of the music outside and dropped to his knees in prayer. There was a huge flash of light – and all the dancers were turned to stone – including Meg, who was just outside the circle…. No sign was ever found of the mysterious musician or his fiddle…

And so the stones remain, in the circle they danced in. In the nineteenth century, local landowner Colonel Lacey found the stones an inconvenience and issued his workmen with black powder and instructions to blow them away. The men placed a powder keg under each stone, and ran a trail of powder to the centre of the circle. It was a fine, clear night, with no threat of bad weather. They put fire to the fuses and watched them creep towards the barrels. Just before the flame reached the powder kegs, the sky was split in half by thunder and lightening. There was no rain – but all the fuses were extinguished. The stones remained where they are – until this day.

They do say, that if you visit Long Meg’s circle and count the stones and twice reach the same number, the stones will come to life and chase you down the hill…. Dare you visit and count? 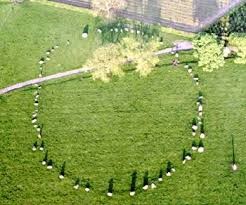 Long Meg’s story… what do you think?

Do you think the story of Meg and her daughters being turned to stone is true? Explain your answer…

If you said no, why do you think stories like this have grown up to explain strange phenomena like stone circles?

In the story, Meg and the priest have a peaceful, tolerant relationship, although they believe different things. What do you think about this arrangement?

Who do you think the story teller meant you to understand the mysterious musician with the fiddle was? Why was he there?

There are lots of stories in Cumbria like this that are linked to features of the landscape that makes up our county. Find another one – ask a relative, go to the library, look on line – and be ready to share your story “Out of the Land” next time.

Will you dare to count the stones?